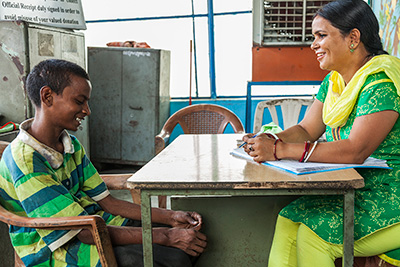 Every day, more than 50 children migrate with/without the company of a responsible adult(s) from the hinterlands of India into the capital city, New Delhi. Due to a combination of various socio-economic exigencies such as poverty, dysfunctional family structure, human trafficking, economic exploitation and bonded labour, it is estimated that more than 50,0001 children are living on the cruel, unfeeling streets of New Delhi.

Even though a safe space and an enabling environment exist within the residential centres for the child, it is but a substitute for a family. Therefore as soon as a child's family is traced, adequate steps are taken in close coordination with CWC to send the child back to the family. Over the years, the centre's staff members have restored children to far-flung areas of the country and even outside the country, specifically in cases where guardians cannot come to take the child back. To keep the strings connected, the centre staff follows up with the family to check if the child was doing fine and had adjusted well.

SBT has conceptualised an effective job placement and rehabilitation programme for the reintegration of children who have grown up/turned 18 into mainstream society. The programme not only has a definite goal of dream and vision development but also looks at dream modification and correction. Many times, children develop unrealistic expectations of themselves which may not correspond to the skill sets they possess. It is common to hear children say, 'I want to become an actor or a film director or a cricketer' but these aspirations require inherent talent that all children may not possess; instead they may have abilities to excel in other professions.

To address this aspect, as soon as a child turns 16, staff members strike up a conversation with the child about their career, regular meetings with the career counsellors are organised, and a rehabilitation plan is drawn to prepare the child to step out of protective auspices of residential centres. The implementation of a rehabilitation plan includes interaction with the child steered by the career counsellor and the centre coordinator monthly. The focal points of these interactions are strengthening a child's resolve towards the career path that they have chosen and whether the rehabilitation steps are panning out as per the plan or not. Preparation of a child for rehabilitation may be fraught with challenges as children are sceptical and scared about leading an independent life outside the centre; they may also become angry and hostile or may distance themselves from the staff members. These negative emotions of young boys and girls at the threshold of maturity are understandable and staff members help them overcome these emotions by recurrent talks and assuring that the SBT team would be a 'call away'.

Role model interaction is a unique aspect of SBT's rehabilitation programme. Role models are young adults rehabilitated by SBT, who have established themselves as successful professionals. They visit various residential centres periodically to interact with the children who are soon to be rehabilitated and share their stories of 'doing well' in the outside world. These interactions serve as a platform to quench children's curiosity who have scores of questions about starting a life of their own in the outside world. The most outstanding feature of these interactions is that they leave children with a feeling that "If they (role models) can do it, so can I!" which makes them want to work hard and create a mark of their own.

Once a young adult finds a job, the SBT staff arranges for basic requirements of the child to start a new life such as ration for a month, utensils, bedding etc. Even after a child is rehabilitated, the SBT team maintains contact with the child to ensure that they find stability and enjoyment in their work. The team also keeps in touch with the employers for a minimum of six months to ensure that rehabilitated children have adjusted to the new work environment. Due to some unforeseen circumstances, if a rehabilitated child quits their job, the team begins a process of placing such children in new agencies. The process of replacement of a child is carried out again in cases where a child expresses dissatisfaction with the second set-up as well. Thus, rigorous efforts are put in to make a rehabilitated child self-reliant. Also, SBT supports children who want to study further by incurring 50 per cent of the course expense, apart from facilitating the admission process. Similarly, for children who look to upgrade their vocational skills through advanced courses, SBT encourages them by making a contribution of up to 75 per cent to the course fee. In cases of medical or other emergencies when the rehabilitated youth needs assistance, SBT provides them with immediate succour till five years after their rehabilitation. Children are introduced to a new life with a message that the SBT team would be there with them in their time of need. It is because of this reason that many children, after passing out of SBT, keep coming back to meet the staff members and trustees of the organisations, thus forming a lifelong relationship of love and care.