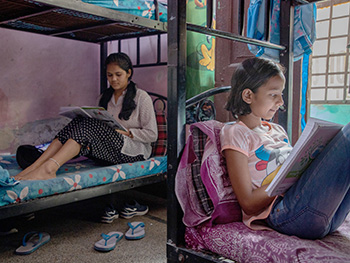 Salaam Baalak Trust (SBT) started as a daycare centre for street children. Over a period of time, we realised that a safe space is the most critical need for any child to realise their full potential. Thus, we started residential programmes to provide a safe and child-friendly shelter for children rescued from the streets and any other distress situations. Compliant with the guidelines of the Integrated Child Protection Scheme and Juvenile Justice Act 2015, we have two Children's Homes for Girls, two Children's Homes for Boys and three Open Shelters for boys to provide 24/7 care and protection services.

'Aasra' literally translates into a safe shelter. SBT's 'Aasra Shelter' is a Children's Home for 50 boys. Over the years, the Founder-Trustees realised that just providing daycare services wasn't helping the Trust realise its end goal, i.e. rehabilitation of street children. Whatever was learnt and built during the day was unlearnt and undone at night when the dark underbelly comes alive. So, in 1993, the first 24X7 residential programme, with a focus on education, mental health care, and skill-building, was initiated as Aasra CHB. The home provides a comprehensive package of services to the children, laying the foundation for their transformation into productive and responsible adults. Embracing an inclusive approach, the team at Aasra CHB strives for the all-round development of all children without any discrimination. Aasra also houses SBT's much-acclaimed, unique Child-Development Unit (CDU), a safe space for children on the autism spectrum. In collaboration with Children First, the CDU caters to 10 boys who are provided therapy, special school education and skill development.

The construction of the Delhi Metro meant the displacement of several families, especially families who lived on the streets. With compassion for the children, the then Managing Director, Mr. Sridharan, came forward with a plan for the children living on the streets and in distressed situations. In 2010, SBT was invited to partner with this plan which consisted of taking care of a Children's Home large enough to house 125 boys.

One of the largest Children's Homes in the city, DMRC CHB, ensures that every child in its care receives every opportunity to grow and develop into capable and contributing citizens. Going beyond care and protection, the DMRC CHB team also provides skill development services for holistic and all-around development. The home is run by a professional team, comprising a coordinator, counsellor, medical social worker, and social workers.

Aarushi Shelter Home was the first full care centre catering to the needs of girls rescued from the streets. They long for a safe and secure space where they can sleep peacefully during the night.

Since 1999, Aarushi CHG has been providing a safe and child-friendly space for girls rescued from the streets and distressed situations in and around Gurugram. The Home provides shelter to 50 girls at any given time. It is well-equipped with all the facilities and amenities such as classrooms, a play area, dormitories, and a computer lab among others. Aarushi Centre remains one of the model child-care institutions operational in Haryana. It functions under the provisions of the Juvenile Justice Act and comes under the jurisdiction of the Child Welfare Committee of Gurugram, Haryana.

While working with street children, the SBT team realised many girls from remote villages and hamlets of India also land up on the streets of metropolitan cities. Many of these girls are missing or run away. Many times, they are trafficked and kidnapped or abused at home. For girls living on the streets on their own, each day is fraught with many challenges and risks. They often report incidents of physical violence, sexual abuse, and attempts of being forced into prostitution. They long for a safe and secure space where they can sleep peacefully during the night. Udaan Rose CHG was initiated with the generous support of Give 2 Asia in March 2010. Udaan Rose CHG caters to the shelter and welfare needs of girl-children rescued from the streets and distressed situations. The children come from varied troubled backgrounds such as poverty, dysfunctional family, sexual abuse, trafficking for labour etc. Several rescued children, most of them for a short stay, are rehabilitated in the most child-friendly manner. It is essential that they not only be educated but also capacitated to lead a life on their own by taking up productive and meaningful employment. 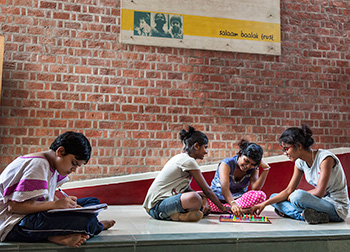 The journey of a child from the streets to a residential centre is often daunting. While living on the streets, children become free souls and they believe they are masters of their destiny. Often exposed to abuse and violence at the hands of older children and many adults on the streets, these children are sceptical about any stranger who tries to help them. Living on their own, these children resist any effort to 'control' them. They choose their freedom over discipline and a set pattern of life without realising that a Children's Home or Residential Centre will provide them with the essential services to lead a normal life.

For many such children, direct enrolment in a full-care residential centre is often challenging. To offset this problem, SBT initiated an open shelter called Apna Ghar in 2000. The centre initially started as a drop-in centre but now as the name 'Apna Ghar' implies, it is an open shelter which children can call their own. The centre functions in the crowded area of Paharganj. As an open shelter, it provides short-stay facilities to boys rescued from difficult circumstances. Due to its proximity to the New Delhi Railway Station, many of the beneficiaries are children who have lived on the streets, in and around the railway station. Even though children stay at the centre for a shorter duration, the centre offers them non-formal education, computer classes, vocational training, and career counselling. The team works relentlessly to minimise children's emotional trauma through psychological counselling and support. They also work round the clock to trace missing children's families and rehabilitate them in their homes across different parts of the country. At any given time, the centre supports 40 boys.

The Old Delhi Railway Station (ODRS) area is known for clandestine petty crimes, human trafficking, and drug smuggling. The area is also a hot spot for local criminal gangs operating through street children. Finding security in togetherness, many of these children fall prey to physical, sexual, and substance abuse. The majority of children living in marginalised situations, in and around Old Delhi Railway Station, do not go to schools because they either work as child labourers, child beggars or while away their time on the streets due to parent and family neglect. Another aspect is that girls are forced to babysit younger siblings and look after the house while parents are at work. Further, a number of these children, even after getting enrolled in schools, are not able to continue their education as they find it difficult to cope with academic pressure in the absence of educational support at home. Being first-generation learners is difficult for young children. In addition, they face discrimination by teachers and school administration on the account of socio-economic background.

In these challenging circumstances, SBT initiated an Open Shelter with a capacity of 25 boys. The team works very closely with Childline ODRS and the contact point in the vicinity to identify new children coming to the area and other children in need of care and protection. Another focus of the team is to act as a halfway house for children struggling with substance abuse. The centre acts as a safe space for pre as well as post-de-addiction counselling and support.

Uday OS was set up in January 2018 and operates in an area adjacent to Ghaziabad Railway Station. With child protection services being strengthened at New Delhi and Old Delhi Railway Stations, traffickers and runaway children now get off a few stations before. Ghaziabad Railway Station happens to be one of these new hot spots. Thus, Uday OS, with a capacity of 25 children, was initiated to cater to the needs of this vulnerable section of children.

Uday OS team makes concerted efforts to trace missing and lost street children's families. Once a child's family is traced, adequate steps are taken in close coordination with the Child Welfare Committee to send the child back to the family. Over the years, the team members have reconnected children to their families in far-flung areas of the country. To keep the strings connected, the centre staff follows up with the family to check if the child is doing fine and has adjusted well.